In Pesquès’ Overyellow: The Poem as Installation Art, the light is magnificent.   Rob McLennan

Overyellow is part of a series that Nicolas Pesquès has been writing over the past twenty-five years; beginning with a mountain that he sees outside his study window in the Ardèche region of France, Pesquès uses an evocation of nature to reflect upon the nature of language and its tendency to separate us from immanent experience. The overyellow of the title refers to the brilliant color of the fragrant English broom that flowers all over the mountain every June.

A bit in the way that Cezanne used Mont Sainte-Victoire as an anchor that allowed him a greater range of artistic exploration, Pesquès returns again and again to his mountain to keep his free-wheeling linguistic experimentation well-grounded, creating a dynamic between concrete presence and abstract investigation that, by carefully avoiding equilibrium, keeps both poles in invigorating play. 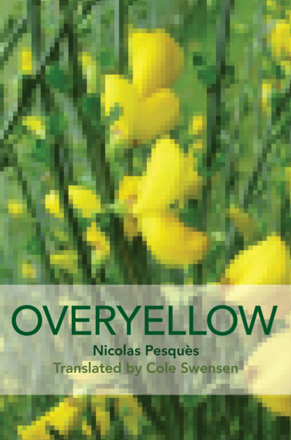 Nicolas Pesquès  is the author of some fifteen volumes of poetry, the two most recent published by Flammarion. His work over the past twenty years constitutes a long meditation on the nature of language considered in relation to a mountain, Juliau, in south-central France. Two previous volumes from this series have been published in English translation—Physis (Parlor Press, 2006) and Juliology (Counterpath, 2008). He also writes extensively on contemporary  visual arts, regularly contributing to exhibition catalogues and art reviews.